Energy-related uncertainties in China have led many investors to look for alternatives. Vietnam is deemed a good choice due, among other things, to the stability of its power network.

During the last 25 years, Viet Nam’s economic growth reached more than 6% each year. At the same time, the energy demand increased almost twice as fast as the GDP. With an expected continuous increase in energy demand in the next years, Viet Nam’s energy sector will have to face many challenges, such as limited domestic fossil resources, air pollution and climate change, causing amongst other things water scarcity. Viet Nam has been ranked among the five countries, that will be most affected by climate change. Another issue is the country's unreliable power supply, especially in rural areas. In order to face these challenges, legislative conditions have to be adopted and the framework conditions for investments have to be reformed to strengthen foreign investments and eventually stimulate the expansion of renewable energy generation capacity.

A reliable power supply is an important requirement for an emerging market like Viet Nam. By the end of 2014, 34 GW generation capacity was installed in the country, producing around 146 TWh of electricity. Assumptions of the Power Development Plan VII (PDP VII) predict an overall power demand increase by a factor of almost 2.4 in the next 5 years, reaching demand of 350 TWh in 2020, with an installed capacity of 75 GW. According to the PDP, coal power plants will mainly contribute to the essential capacity expansion, surpassing hydropower as a primary resource for electricity generation.

Currently, power production is still dominated by hydropower with a share of 41% in electricity generation, followed by natural gas with 31% and coal with 26%. Due to limited domestic coal and gas resources, Viet Nam’s fossil import dependency will increase. Except for hydropower, markets for renewable energies such as wind and solar power are in a very early stage of development. Knowledge and reliable information about project development or regulative processes are very limited. 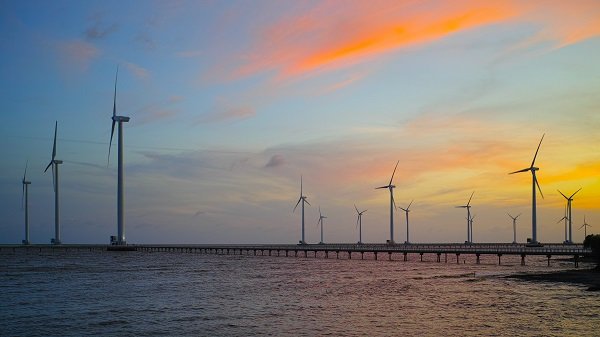 In 2014, renewable energies (including hydropower) contributed 41% to Viet Nam’s electricity demand, but this share was almost exclusively accounted for by hydropower. According to the MoIT Small Hydropower (SHP) can still be expanded, but in general Viet Nam’s hydropower potential is nearly exploited. In contrast, wind, solar and biomass expansion potentials are high and to a great extent untapped.

The government also has incentives for solar projects until mid-2019 and for wind projects up to 2021. Vietnam aims to have solar and wind installed capacity of 0.8MW and 0.85MW respectively by 2020. However, a total of 2.8GW wind and 10GW solar power plants have already been approved until February 2019.

All of these factors can make sure the stable in providing energy to living and maintain manufacturing activities in Vietnam. Additionally, it may help Vietnam keep going while China is facing the energy crisis. This can be the big advantage of Vietnam to attract more FDI. As China is the biggest manufacturer in the world, in this situation, many foreign companies are looking for a new supplier, outsourcing manufacturers that Vietnam is the potential location.

Incorporated in Hanoi, the capital city of Vietnam, with the global sales office in Singapore, the business and financial hub of the region, we are well connected globally, and our customers are assured of a conducive business environment. VMF aims to reshape the traditional supply chains of the manufacturing industry by bringing the vast network of Vietnam factories to the customer under a single platform, to break all barriers between international businesses and local factories. Let's contact us for discussing more incorporating opportunities via email (This email address is being protected from spambots. You need JavaScript enabled to view it.).