What is the difference between Casting and Forging

Casting and forging are two different methods of metal fabrication. Both processes have been around for thousands of years, but what are the differences between the two metalworking methods?

Casting is the process of pouring molten metal into a mould or die and allowing it to cool and harden so that it takes the shape of the mould. The process is ideal for mass-production of parts with the reuse of the same mould to create identical products.

There are several different types of casting. Die-casting is when liquid metal is forced into a die instead of a mould, and there the applied pressure keeps it in place until it hardens. This process is known for the high-speed applications it supports. Permanent mould casting involves pouring the molten metal into a metal mould, using gravity or a vacuum to fill the mould. Permanent mould casting can create stronger castings than die casting, but they can be difficult to remove from the final product. For this reason, semi-permanent mould castings are also available. These moulds have expendable cores, making them more manageable and less costly to remove.

The final casting process is sand casting. With sand casting, castings are made by pressing a pattern into a fine mixture of sand. This forms a mould for the molten metal to be poured into. This process is slow but is generally more economical than the other forms of casting. It is also good to use when intricate designs are needed, or for large metal fabrication.

Forging uses compressive force to shape metal. A hammer or die strikes the metal workpiece until the desired shape is formed. The pounding action of forging deforms and shapes the metal, which results in unbroken grain flow, which allows the metal to retain its strength. Ancillary effects of this unique grain flow include the elimination of defects, inclusions, and porosity in the product. Another advantage of forging is the relatively low costs associated with moderate and long production runs. Once the forging tools have been created, products can be manufactured at relatively high speeds with minimal downtime. 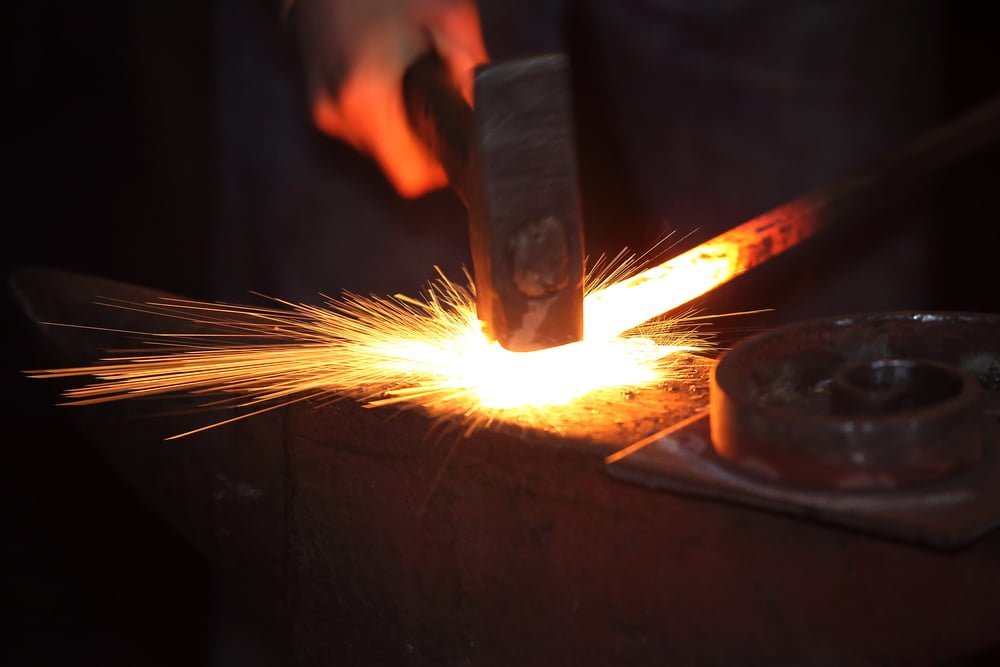 What’s the Difference Between Casting and Forging?

Forging creates metal products with generally higher strength that are typically tougher than metal processed in castings. Metal forgings are less likely to shatter at contact with other objects. The increased strength is a consequence of how the metal is forced into a new shape, by pressing or by hammering, during forging. As opposed to other methods of fabrication, the metal’s grain is stretched in this process, aligning in one direction instead of randomly. By the end of the forging process, the resulting metal is stronger than it would have been having it been cast.

With casting, molten metal flows into a cavity in a mould or die, which allows for more complex shapes to be easily produced. Practically any material can be cast, and products up to 200 tons can be created. Casting is often much cheaper than forging. Both casting and forging have their advantages and disadvantages, so the better method depends upon what is being fabricated.