Business sentiment eased to a three-month low on worries about the Covid-19 outbreak, but firms remained optimistic overall that output will increase over the coming year.

The Vietnam Manufacturing Purchasing Managers' Index (PMI) posted 53.1 in May, down from 54.7 in April. However, according to Nikkei and HIS Markit, the latest reading signaled a sixth successive improvement in business conditions and one that was solid despite weakening from the previous month. 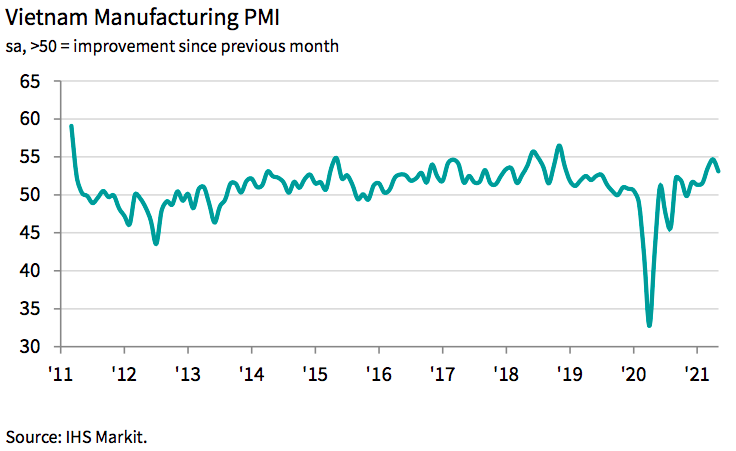 “Latest data and anecdotal evidence from respondents suggested that the recent outbreak of the COVID-19 pandemic limited growth of both output and new orders midway through the second quarter of the year,” noted the IHS Markit’s report.

While the rate of expansion in production eased to a three-month low, it stayed in the positive trend as new orders continued to rise, it added.

The same was true for new business, which increased at the softest pace since February and the ninth month. Solid growth was also recorded for new business from abroad as some export markets showed signs of recovery from the Covid-19 pandemic. Staff shortages contributed to a near-record rise in backlogs of work as firms struggled to cope with inflows of new orders. Outstanding business accumulated to the greatest extent in more than a decade.

Operations were also hampered by a marked lengthening of suppliers' delivery times, the greatest in just over a year. Again, the pandemic was a factor behind longer lead times, with shipping delays and material shortages also highlighted. Despite delivery delays, firms expanded both their quantity and stocks of purchases amid efforts to build reserves. That said, in both cases, rates of increase were slower than in April.

The rate of input cost inflation quickened to a 40-month high in May. Supply shortages contributed to rising raw material prices, with iron, oil, and steel all mentioned in particular as costing more. Higher freight prices were also signaled.

In turn, manufacturers raised their own selling prices at a substantial pace. Moreover, the rate of inflation was the fastest in just over a decade, and the third-steepest since the survey began.

Business sentiment eased to a three-month low on worries about the Covid-19 outbreak, but firms remained optimistic overall that output will increase over the coming year. Hopes that the virus will be brought back under control and the prospect of further new order growth supported confidence.

“The challenges of the Covid-19 pandemic returned to the Vietnamese manufacturing sector during May as an outbreak in the country hampered operations,” said Andrew Harker, associate director at IHS Markit, which compiles the survey.

“Output, new orders, and employment all grew at slower rates, while difficulties completing orders meant that backlogs of work increased at one of the sharpest rates in more than ten years of data collection. Efforts to fulfill orders weren't helped by further supply-chain disruption, which also contributed to price pressures. In fact, firms raised their selling prices at the fastest pace in more than a decade,” said Harker.

"Firms will be hoping that the Covid-19 outbreak can be brought under control quickly, as has been the case in the past in Vietnam. Confidence took a hit in May, but firms remained optimistic regarding the 12-month outlook for production," he noted.

In May, Hanoi’s index of industrial production rose by 1.8% against last month and 5.1% year-on-year, leading to the overall growth of nearly 10% year-on-year in the five-month period and contributing a major part to the city's push for economic recovery.

The manufacturing and processing sector, accounting for 96% of total production value in the local industrial sector, remained a key driving force with an expansion rate of 9.7% year on year.